So a few updates on the site.

A.) If you click a picture you get a nice photo-viewer within the window instead of opening up a new tab. It looks much nicer and you can scroll through all the photos within each post. Enjoy!

B.) We now have T-Shirts available! If you click 'Store' above in the navigation bar you will see what styles are available. They're not very expensive, and I have a few other 'sciencey' shirts available (they cost a little more because you have to pay a little to use the design but are cheaper than buying them from the designer). If you have any ideas or suggestions please let me know!

And if you buy a T-Shirt, take a photo of yourself in it and send it to us, we'd love to see them!
Posted by Unknown at 1:33 PM No comments: 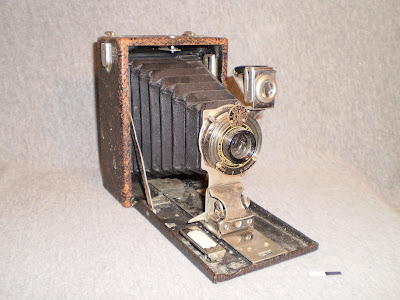 And to wrap up the mass celebration posts celebrating one year of the Sholesonian we have my personal favorite camera in the History and Cultural Collection: an Eastman Kodak The Premo Camera Film No. 1. Produced back in 1906 this camera utilized 3 1/4 x 4 1/4 sheet film. This meant that only one picture could be taken at a time. This camera was designed by Kodak more for amateur photographers of the day and was a bit more budget friendly. The camera has a variety of scales for determining which distance to pull it out and how to set the lens depending on brightness to allow amateurs the ability to take good photographs without needing to know all the references that the professionals did.

While it may be surprising today, when this camera first came out over a century ago it was one of the most convenient cameras on the market. Lightweight and compact (the billows folds right up into the box) made it easy to use. It features two tripod sockets, one for landscape and the other for portrait. This particular specimen has lost the strap handle and the pump thing (I apologize I don't know what it's called) for taking a picture.

This camera was one of the many models used by George Eastman in revolutionizing the photographic world. Kodak would become a powerhouse and household name for cameras and film. This early model was one that popularized public use of cameras at home and made it more affordable and portable for the average user. Scroll down this site to learn more about these Kodak Film Premo No. 1 cameras.
Posted by Unknown at 6:28 PM No comments: 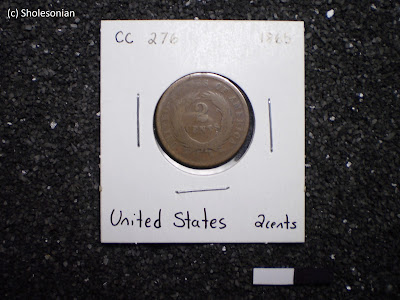 A year ago as part of the opening of the Sholesonian we posted a specimen from each of our six collection, today in celebration of our anniversary we are continuing that with a interesting piece of American history in the Numismatics Collection. For about a decade between 1864 and 1873 the United States tried its hand at producing a two cent coin. Made up of mostly copper with a hint of tin and zinc, the coin did not last as long as its three-cent cousin and was discontinued. In today's economy the coin would be worth approximately 28 cents.

The obverse of the coin features an American shield with the motto "IN GOD WE TRUST" with two arrows and olive branches sporting behind the shield. The reverse on the other hand features the denomination within what appears to be a wheat wreath with "United States of America" heralding above. This was actually the first coin to feature the iconic "IN GOD WE TRUST" on the coin itself. There have been some attempts to revive the two cent coin, but they have easily died out, even with a burst of public enthusiasm when they were first minted in 1864, the excitement died out fairly quickly.

If you're interested in learning more here's a great article on the history of the two cent piece.
Posted by Unknown at 5:43 PM No comments: 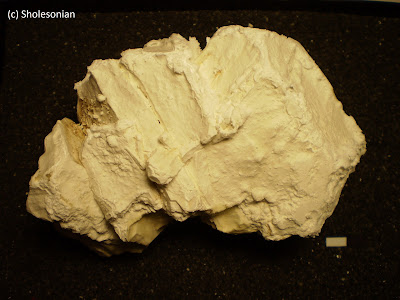 Not all minerals have to be pretty crystals, as demonstrated with this nesoborate. I was able to acquire two of these giant chunks of what appears to be a lumpy white mass of mineral. What it lacks in beauty it makes up with being a more odd mineral than not. It's a white powdery mineral that grows in this sort of crystal pattern rather than the fine quartz structures everyone is most familiar with.

Mined out of Chihuahua, Mexico this mineral specimen is very similar to borax, a common cleaning detergent. In fact tincalconite is normally made by simply dehydrating borax and sodium borates, but it's also found naturally. It is a 2 on Moh's scale of hardness and has a fairly small specific gravity of 1.88. While this particular specimen isn't that great of quality, they have a hexagonal crystal structure and form some pretty nice looking specimens. Check out this page for more scientific data and other details of tincalconite.
Posted by Unknown at 3:10 PM No comments: 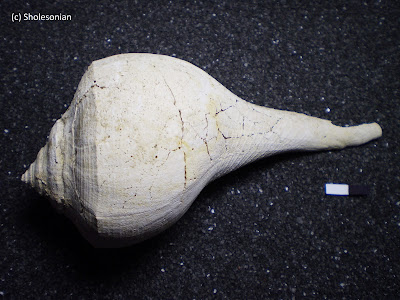 Continuing with the mass posting to celebrate one year of the Sholesonian, we have this interesting fossil snail shell specimen. Normally I try not to pick up any fossils that don't have location data attached with them, they lose their scientific importance without it, but this one has an interesting feature that makes it a nice new addition to the Fossil Collection.

If you take a look at the photograph of the shell you should see a lot of cracks in the shell. At first glance you may think, as did I, that these are just stress fractures from it breaking over time. But as it turns out these are actually quite different. These cracks were caused by another animal that was boring into the shell. Whether the snail was alive or deceased when this was happening isn't quite clear, but either is a possibility. The two possible culprits for doing this is either Cliona (a boring sponge) or a bryozoa (a moss animal).

As for the shell itself, I've been told that it belongs to the genus Sinistrofulgur, which through some looking up seems to be now a part of Busycon. It's most likely Pliocene in age, meaning that this is a relatively recent fossil, only a few million years old. These snails are equipped to drill holes into their prey, usually bivalves, and eat the insides if they are successful. This particular shell is left-handed. And yes while snails don't have hands they can be either right or left handed. To figure out which a snail is hold it up with the point of the spiral up and whichever side the opening is on decides which-handed it is. If you mentally rotate the picture below 90 degrees clockwise you will see it. 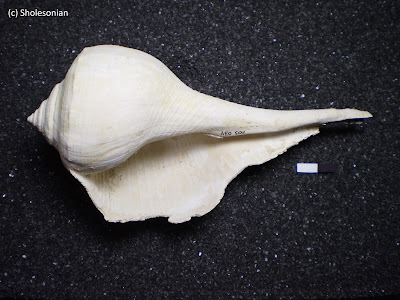 Posted by Unknown at 2:46 PM No comments: 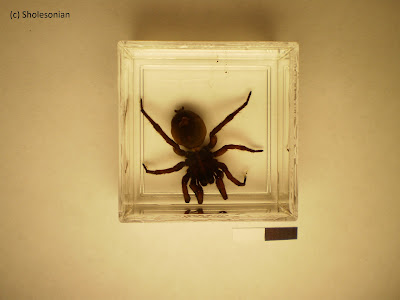 Spider Saturday is actually up on time today during our anniversary celebration! Those of you keeping up with the Facebook page may have already taken a quick look at this big local spider. This past May I was taking a walk and stumbled across this mean looking spider crawling across a path by the Johnson Art Museum at Cornell University. I happened to be carrying a capture cup with me and it just managed to fit inside after some difficult maneuvering. It did manage to escape on my while trying to preserve it and was running around my room, but I managed to recapture it without any harm done.

This spider belongs to the family of wolf spiders: Lycosidae, and is of the genus Hogna. There are many species  in this group so without putting it under a microscope to examine its nether-regions. Wolf spiders are well identified by their characteristic wolf spider eye pattern. The mothers are also well known for carrying their newborn on their abdomen as seen in this Wikipedia photo. They generally come out to hunt at night and if you are looking for them shine a flashlight down looking for the reflections in their eyes. Don't worry, as big and bad as they look, they aren't poisonous and generally not harmful to humans.
Posted by Unknown at 2:14 PM No comments: 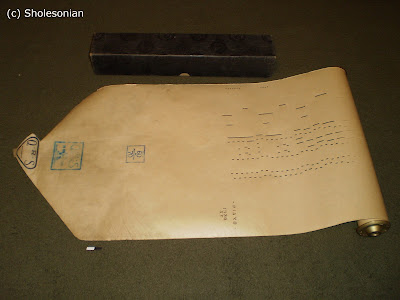 So it's been a busy past few months, but with excitement we celebrated the one year anniversary of our first post this past Thursday October 13, 2011! Over 100 posts after our first post I bring you another five posts to celebrate the event! First up is this nearly century old player piano roll with the song "Do You Ever Think of Me." It's a foxtrot with words by Harry D. Kerr and John Cooper with music by Earl Burtnett. You can check out the lyrics and even download for free what the song would sound like on the piano at the link above.

So, for those of you still in confusion, this song isn't ordinary sheet music. It's a roll  to be used in a player piano, those old pianos in the height of popularity during the 1920's that would play by themselves. Using the small punches in the paper the piano would be able to 'read' the music and play the tune without a need for a human player. At one point during the early 1920's half of the pianos being made in the country were player pianos. After the fall of the Roaring Twenties with the stockmarket crash the popularity of the player piano fell into deep decline.

For those interested this is word roll 1336, and despite the song having lyrics, obviously the piano only played the music itself. Back when it was originally made the song itself cost $1.25, approximately $14.50 in today's economy.
Posted by Unknown at 1:09 PM No comments:

Those of you not keeping tabs on our Facebook pages should enjoy knowing that our Family Fun Day exhibit was a complete success! On Saturday September 24, 2011 at Ithaca, NY's Museum of the Earth, the Sholesonian set up a table for their Family Fun Day. With a variety of treasures from all six of our collections, patrons were able to enjoy all the unique items. Check out the photos of the event below and click on a photo to enlarge it!