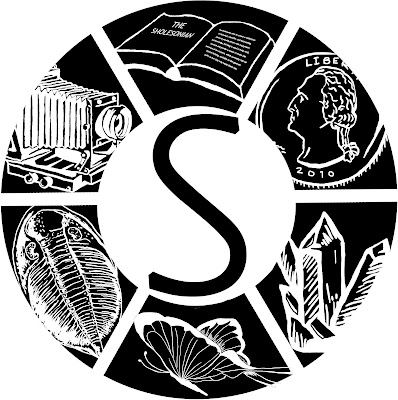 So the time has finally come where we now have an official logo for the site! Special shout out thanks to Rachel who has graciously given her time to create this masterpiece.

As you can see, the six different sections represent our six different collections: an old bellows camera for our Historical & Cultural Collection, a Devonian trilobite for the Fossil Collection obviously, a beautiful butterfly marks our Natural History Collection, a chunk of quartz crystals stand for the Geology Collection, a simple U.S. quarter with the date of our founding for the Numismatics Collection, and last but not least a book open to the Sholesonian guide marks our Publications Collection.

Enjoy, and let us know what you think!
Posted by Unknown at 9:59 PM No comments: 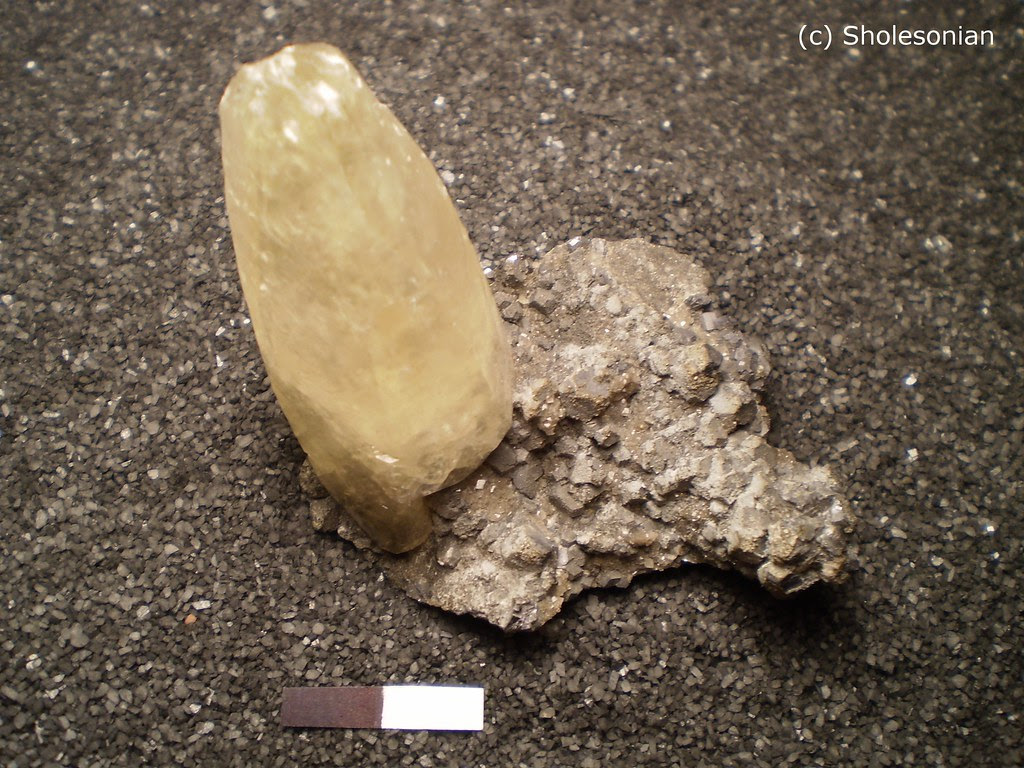 Just a quick interesting post for today. I'm not going to go into the details of either calcite (the mineral that makes up the one large yellowish crystal) or the galena matrix it sits on, though I have separate specimens for both of them and will post them on a subsequent date.

But you should all be excited! This past weekend the Sholesonian acquired a very large collection of minerals of all sorts, sizes, colors, and types so expect a large array of very interesting and display worthy specimens floating out of the Geology Collection. This brilliant piece was originally part of the R.M. Eaton Collection from Rochester, New York. The calcite is part of the carbonate mineral class whereas the galena is a sulfide mineral. So enjoy this great piece and the many more to come!
Posted by Unknown at 6:39 PM No comments: 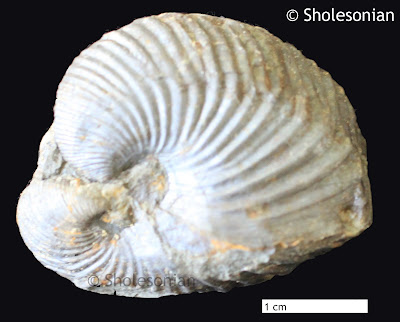 Here is a great brand new addition to the Sholesonian's fossil collection, and it's been identified to boot! This specimen is a fairly large bivalve (think clams and others in the class Bivalvia) that is from the Middle Devonian which started around 397 million years ago; 397,000,000 years!! It was recovered from the Hamilton Group, Moscow Formation in Lansing, New York just yesterday.

What is cool about this specimen other than it's size and great preservation is that this is a burrowing bivalve. Thus it goes into the sea floor sediment to live and was eventually buried for good, whether it was alive or not is another question (though probably not). I unfortunately don't have too much more information on the Grammysia genus, but it's still a very cool specimen. Also, shout out to our graphic designer Rachel for taking my photograph and revamping it up to a more professional level. Enjoy!
Posted by Unknown at 7:38 PM No comments: It's another scorching hot day here so just a quick post to hold you over. This is a nice larger mineral specimen heralding all the way South from Brazil. Kyanite is its name and it gets its name from the Greek word meaning 'blue' (for obvious reasons). Though don't take it that all Kyanite is blue, like many other minerals it can have a variety of color shades. This one also comes in white, gray, green, and black, though blue is the most commonly found type. Remember that to identify minerals you can't just use the physical properties (i.e. color/shape/taste in some cases but don't go around licking rocks), you must also use the properties such as hardness, streak (the color produced when rubbed on a streak plate, it's not always the same), density, crystal lattice, and of course chemical composition. Kyanite is made up of Aluminum (Al), Silicon (Si), and Oxygen (O) with a chemical formula of Al2SiO5. It has fairly good cleavage (roughly meaning it forms sheets), has a hardness of between 4 and 7 on Moh's Scale of Hardness, a white streak, and has a fibrous habit for growing.

What's interesting about Kyanite is that it's an index mineral. Much akin to how index fossils are used for relative dating of the surrounding fossils, this mineral is used for finding the approximate temperature/pressure of the surrounding rock. This is because Kyanite is normally found in metamorphic rocks and is normally found above 4kB of pressure. If you take a look at this metamorphic mineral phase diagram, you can see that the triangular shaped chunk in the upper left-hand corner is Kyanite and if you know what the temperature is and you find a certain mineral you can estimate the pressure, or if you know the pressure and a mineral you can estimate the temperature at which it formed, though this is just a rough sketch of how to use it. It's other main uses include being used in dishware and electronics. And as always you can find more information concerning this interesting mineral Kyanite here.
Posted by Unknown at 7:03 PM No comments:

So there hasn't been many posts in awhile, it's been busy here, so I thought I would share with all of you some test images I made today using the Scanning Electron Microscope. None of these specimens are in the Sholesonian collections but it's still very cool to get up and close with these minuscule animals. I suggest you check out this site to learn how a scanning electron microscope even works. And for your reference there is a scale on all of the images, just keep in mind that a micrometer (that's what the numbers are in the Greek letter Mu is used) is 1/1000th a millimeter and thus 10-6 meters or 0.000001 meters. These things are around 500 micrometers across which is about half a millimeter. Enjoy!

Posted by Unknown at 5:51 PM No comments: 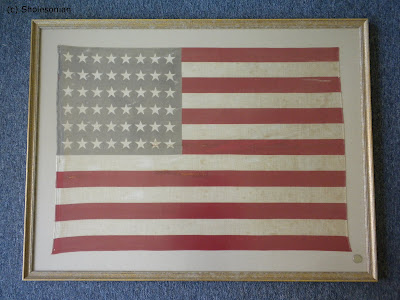 Happy Independence Day! Browsing through the Sholesonian collections I was trying to decide what would be a great piece to post that celebrates the United States on it's 235 birthday and what better than the old American Flag. This is one of the more prominent permanent displays at the Sholesonian, but what makes it so special? Well, count the stars. That's right this is an original 48 star flag, framed in all its glory (you can see George Washington in the corner on a quarter for scale). For those who are a bit rusty on their American history, the current 50 star flag came into being after Hawaii finally declared statehood after Alaska back in 1959.

Back in 2003 my grandparents were selling their large estate to move into more manageable housing and you may not know this but the Sholesonian has its roots in this house. My grandfather had turned the 2nd floor in a three story barn into a small personal museum, displaying all old stuff he had collected over the years being both a businessman and a farmer. This inspired me and has evolved into the current site you're reading. But the top floor of this barn had a half basketball court where my cousins and I would play when we came over. At the peak of the court hung this flag and while no one payed any attention to this dirty ragged old flag I managed to catch a glimpse and noticed it had 48 stars in the closing moments before I would leave the barn for good. So my grandpa took out the ladder, took it down, gave it to my mother to clean (it nearly disintegrated hitting the water), it was repaired a little, framed, and given to me for my birthday years ago. And as it turns out it was my father who placed this up in the barn back when he was a young kid.

On the back of the frame reads:
"Barn Ball Flag"
Placed in Peak of Barn at Sholestead,
Sennett, N.Y. by David G. Sholes
around 1965. Retrieved by Steven F.
Sholes upon sale of Sholestead in July
2003.

The 48 star flag was used for 47 years and is the second longest used flag in American history, with the current 50 star flag beating it out. It first came in use in 1912 after the incorporation of Arizona and New Mexico into the Union (There was no 47 star flag but a 49 star flag was used for a year). It's also interesting to note that there are already flag proposals for flags up to 56 stars for any case in which some territories of the United States reach statehood (such as Puerto Rico, Washington D.C., New York City, etc.), and you can learn more about the history of the US flag here. And I also suggest you hop on over to the Smithsonian site to check out THE original Star Spangled Banner - the one Francis Scott Key saw still waving over the fort and wrote the song from.
Posted by Unknown at 4:33 PM No comments: