So, as I try to balance my math and physics problem sets with preparing for my Family Fun Day table this weekend there aren't going to be any posts this week (hopefully to resume next week). But to hold you over here is a nice website dedicated to debunking all of those pesky arachnid related myths.

Do you actually swallow 8 spiders in your sleep per year?
Are daddy longlegs the most poisonous spiders in the world?

* Also I may start using the 'Blog This' feature of Google Chrome to start just posting links to interesting scientific and historical findings that I come across. Let me know what you think.

'via Blog this'
Posted by Unknown at 1:39 PM No comments:

Email ThisBlogThis!Share to TwitterShare to FacebookShare to Pinterest
Labels: Current 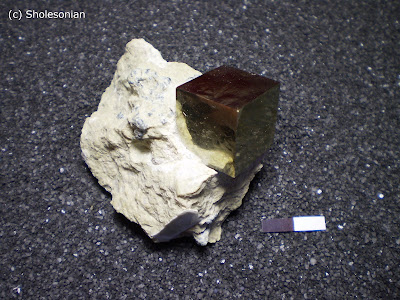 So, by popular demand I am posting up one of the brand new awesome minerals! For starters, yes this is really how it looks. It's known as a pyrite cube and Spain is famous for having these great crystal structures where the pyrite mineral forms large cubes like this one. Pyrite is more commonly called Fool's Gold due to it's gold coloring. While they usually don't come in these pristine cube shapes, most pyrite specimens have a distinct cubic pattern if you look really closely. Sometimes you will find very cool Pyrite disks which look like gold sand-dollars, unfortunately the Sholesonian does not have one in the collection, yet.

Pyrite is about a 6 on Moh's Scale of Hardness, has a fairly high specific gravity (think weight/density), and is a sulfide mineral. The chemical composition of pyrite is FeS2, or just iron sulfide. It's name comes from the Greek, of fire, because it would be used to make sparks when struck against steel. You will often find fossils, even here in Central New York, where you get pyritization, pyrite crystals form and replace some of the fossil material creating a spectacular display of a golden fossil. There are a few other pyrite-similar minerals: Arsenopyrite and Chalcopyrite, both of which will eventually be posted up here later on.
Posted by Unknown at 12:50 PM No comments:

As I mentioned earlier I was a speaker at the Paleontological Research Institute's 5th annual Summer Symposium talking about this blog and the outreach I have been doing. [You can see me in the bottom left-had picture in the red jacket.]

Anyway, I will be doing a small one-day exhibit over at the Museum of the Earth in Ithaca, New York on Saturday September 24th for their Family Day (and opening of the new Fossil Prep Lab which I have worked in before). I'll be there with some unseen pieces of the Sholesonian Collection while teaching kids (and parents, others, etc.) tips to having collections. You'll get some inside tips of the trade.

I will also probably be giving another brief presentation on the Sholesonian at this event and as always will be glad to talk to individuals and families about pursuing collecting - whether it be fossils, insects, rocks, or memorabilia. And as always, leave a comment here, email us, or post on our Facebook wall if you have any questions about your own collection or just want to say hello!

And as a side note, I am providing here a list of endangered, threatened, locally extinct, and species of special concern list for the state of New York. Please note that if you do collect shells/insects (or delve into taxidermy) to not capture/kill any of these species. We must protect our biodiversity and natural wildlife to [Dare I say it: Save the world! (I stole that from Bill Nye whom I just recently met)] This also means that you should not collect an excessive amount of any one species, even if they are very common (a lesson we should learn from the Passenger Pigeon). Hopefully I will print out a nice handout with picture of what not to collect for the event.

Posted by Unknown at 2:48 PM No comments: