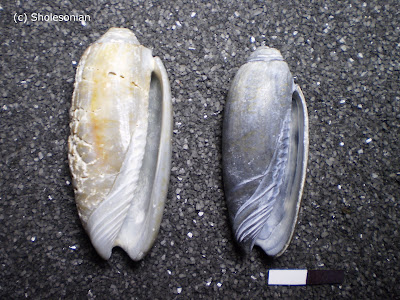 Well after a two week hiatus, the Sholesonian is back up with a blog post. Not to worry though, as during those past two weeks I have been busy with curating the specimens in the Natural History collection as well as capturing new species to add. Today's post is brought through a small donation of nice shells from Myrtle Beach,  South Carolina. Collected in April of 2011, these two shells belong to the Olividae family and are of the Genus Oliva (species is most likely Oliva sayana). These are snail shells that are commonly referred to as 'olive shells' or just 'olives.'

They are a predatory species of marine snail, feasting on primarily small bivalves (like clams). Known for their elongated shape, these snail shells have been used for centuries in making jewelry and have become so popular, especially among collectors, that it is now the state shell of South Carolina. Also known for burrowing, these guys can be found mainly across the coasts of the Western Atlantic. You can read up a little on the Olive Shells here but there isn't too much to go on and you may have to do some jumping around.
Posted by Unknown at 4:33 PM No comments:

While there hasn't been many posts lately, the Sholesonian has been far from stagnant. Now three of the collections have had their catalogs digitized and you the readers can now take a peek at what is in the collections. Note that the yellow highlighted numbers are open and will periodically be filled in as new specimens come in and as others are finally cataloged. Also, not everything has been identified or even has information.

And be sure to Like us on Facebook to keep up-to-date!
Posted by Unknown at 8:26 AM No comments: 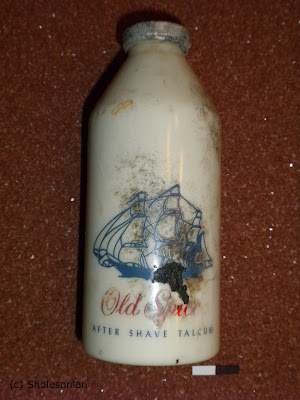 Long before Isaiah Mustafa had his claim to fame in now popular Old Spice Commercials, Old Spice had a slightly different set of products. Originally a Shulton Company fragrance for women, it later turned into products for men, including aftershave and shaving soap. This was the case from 1938 until 1990 when the company was purchased by Proctor and Gamble where not only was the trademarked changed from the traditional sailing ship to a more streamlined yacht, but also expanded their products to include deodorants, body wash, and sprays.

Awhile back I found this bottle slightly buried in my backwoods, probably thrown out by some previous owners before the modern day waste-removal systems. As you can see this is an older bottle, due to the classic brand design and bottle form, and is After Shave Talcum powder instead of the traditional After Shave Lotion. Doing a little bit of research I find that this most closely resembles the 1956 glass bottle form due to its shape. And although it is missing the distinctive bottle stopper which would give a more accurate date to it, the design and writing seems to do the trick.
Posted by Unknown at 9:21 PM No comments: 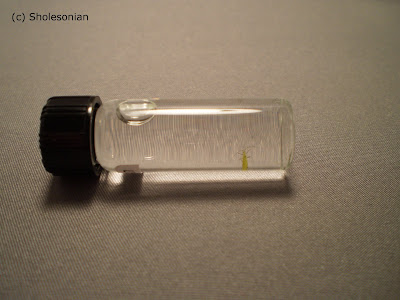 So, apologies for not having the new photo system up for this picture and for neglecting to post anything up in awhile. The former is because over time the insect has lost its green coloring and is now more black than it was after first being captured. This guy is actually a bug (as not all insects are bugs but all bugs are insects), and I don't actually know where it came from. Cornell University's Entomology department every year throws Insectapalooza and they happened to have an aphid exhibit. This particular guy was one of the hundreds that they have that managed to escape the net and I subsequently caught it. So I don't know if it was a local species or came from somewhere else for study here, but probably the former.

Aphids, while they cannot jump and don't always have wings, and despite their small size are known to be quite a pest. This is because the are known to carry hundreds of different plant viruses and even though they move slowly they can cause plants to become sick. They are also known for secreting a substance called honeydew (not the fruit), which contains the excess sugars that the aphid cannot use. A variety of other animals use this substance, especially some ants and bees, to eat. Some ants will even 'milk' the honeydew from the aphids in a symbiotic relationship.

Posted by Unknown at 2:30 PM No comments: