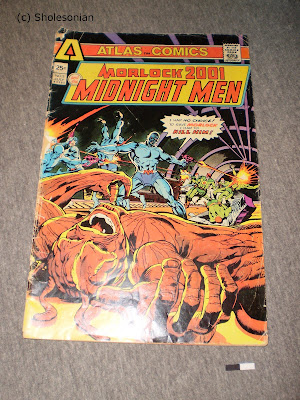 Wow, it has been awhile since the last update, but here is a very interesting and comic comic. While I haven't collected any comic books before, this one seemed very interesting and obscure. Most of us have heard of the top comic book companies, DC and Marvel, but this is from the lesser known Atlas Comics. Worth only 25 cents when it was issued in July 1975, Morlock 2001 and the Midnight Men is the third issue of the Morlock series. However, Atlas Comics failed to capture enough consumers and was defunct within a year leaving even it's most popular titles with only four issues.

Since I only have the third (and last) issue, I am unaware of a lot of the background story to the exact premise of Morlock, but I learned enough in this issue. The year is 2002 (!) and all forms of books are banned (similar to the storyline of Fahrenheit 451). Professor Whitlock's secret library  is burned down along with himself (at midnight) by the government for treason, while Morlock is questioning himself about transforming into his monstrous form in order to help the professor. Morlock is a guy who comes from a pod of unknown origin but was betrayed by the government scientists that raised him, and has the ability to transform into a monstrous plant/beast. He has extra arms, is extra big, his flesh is like a slimy mold that liquefies human flesh which he absorbs.

After 'eating' the guards he fails to save the professor who burns up in the flames. But alas! The professor miraculously survives the inferno, but his entire body is covered in severe third degree burns, yet he feels no pain. He drags Morlock to safety and they go to the underground railroad (under former NYC) where there is an uprising of against the government 'The Tribunal.' The professor renames himself, in new uniform, Midnight Man and requires all those in the rebellion to dress up and be the Midnight Men. He plans to use Morlock and his powers to help fight the Tribunal. However, the government discovers their secret hideout and attack, but Morlock has no control over his powers and doesn't want to become a mindless beast once more. So to save Morlock, Midnight Man shoots and 'kills' Morlock and rushes off to fight the Tribunal forces.

And that's it. The company did not make anymore issues as they were folded over. It should be noted that this particular issue was nearly a saving grace, as it became one of the more popular issues, yet not enough to save the company. If you want to learn more about Morlock 2001 and the Midnight Men check out this great website on the comics. 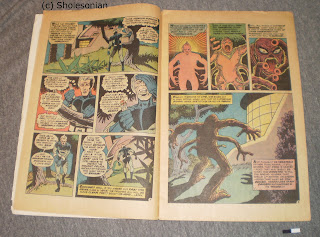 Posted by Unknown at 5:03 PM No comments:

Summer Symposium at the PRI

So for those who didn't hear, the Sholesonian recently made a presentation on its collection and outreach effort at the Summer Symposium 2011 at the Paleontological Research Institute. I gave a brief overview on what I do with this site as well as giving a quick look on how to make your own insect or fossil collection. If you have any questions or want to learn more feel free to leave a comment here, on our Facebook page, or shoot us an email. I have made the presentation available for your viewing right here so enjoy! 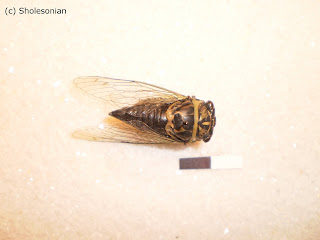 So I was shot a question the other day over the true nature of cicadas, and thus I am presenting one from the collection to quickly clear up some misconceptions. Sitting outside in the hot summer sun, you hear the most distinguishable sound of summer a loud buzz that encompasses the whole area. This is the work of the cicadas, a bug that is famous for its moltings and life-cycle. The insects themselves generally aren't seen (except as will be noted) but once they emerge from the ground the nymphs will shed their old 'skin' and leave behind the moltings, clinging to trees for us to find.

This is where some confusion over these critters usually comes in. For those who are unaware cicadas are well known for their odd life-cycles. After laying their eggs in twigs the larva will make their way underground where they will stay for years at a time. The famous ones are the American 13 and 17 year cycle types of the Magicicada genus. This means that the larva will stay in the ground for 13 or 17 years, then will emerge in swarms, but within two months all the of them will die only leaving behind the eggs for the next periodical cycle to begin.

However, this particular specimen isn't one of the extremely long term species. It's a common Dog-Day Cicada of the Northeast US, and this one is just an annual cicada. So rather than waiting in the ground for 17 years, the nymphs are only buried for a year where they feed on root juices. They all don't come out at once, but are distributed throughout July and August. And because the nymphs feed on the roots of trees they are known to be a pest.

Also, you may be wondering what is the point to having a 17 year developing stage only to live 'normally' for a summer? Well it's believed that emerging in one massive brood can overwhelm predators like birds. It is also thought that having such a long and prime-numbered life cycle makes it harder for predators to keep track of. As always here is an informational page on the Periodical Cicadas for you to learn more about their life cycles and how to deal them as pests.
Posted by Unknown at 8:47 PM No comments: