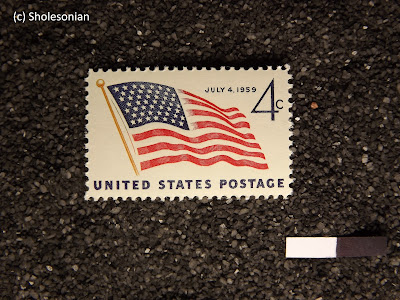 If you remember awhile back, our 48-star flag was put on display, but add another state to the union and the flag needs to be changed with an added star. Now unfortunately we do not have one of these rarer 49-star flags (after Alaska was admitted to statehood on January 3 of 1959), but we have the next best thing an old US postage stamp commemorating the new state in the North. Oddly Alaska was originally referred to as Seward's Folly after William H. Seward, Secretary of State under Presidents Abraham Lincoln and Andrew Johnson and Governor of New York, bought the Alaska territory in 1867 from the Russians for two cents per acre. Many people mocked him for such a pointless purchase (Why buy a frozen tundra twice the size of Texas?), but in the end was found to be a smart descison.

Seward is from Auburn, New York (very close to the Sholesonian) and thus it makes sense that this stamp was distributed through the Auburn Post Office starting on July 4, 1959 when the new 49-star flag became official. It was worth four cents, the amount it cost to mail a letter as compared to fourty five cents in 2012. 209,170,000 of these commemorative stamps were issued (120 million initially) and were sold in sheets of fifty. While the stamps lasted for awhile, the physical flag itself had a short lifetime. With the admission of Alaska in January, the forty-nine star flag was short lived until eight months later when Hawaii was asscessioned into statehood on August 21, 1959.

The stamp was designed by Stevan Dohanos and issued under Postmaster Arthur E. Summerfield. It was printed on the Giori press which has an interesting story in itself, check out the link to learn more. You can find more information on 49-star flag stamp and the rest of the 1959 stamps issued here. Below is a photo of Army Quartermaster Andrew McNamara and President Eisenhower unveiling the new 49-star U.S. flag.