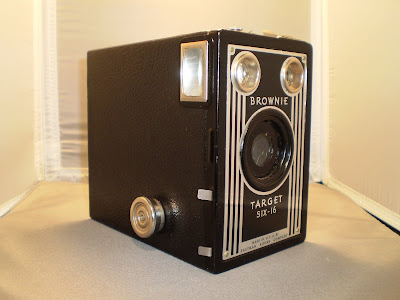 HS 001
Brownie Target SIX-16
Era: ca. 1940's-1950's
Details: Black, w/film, Eastman Kodak, dual finders
First off, I have an extensive camera collection so expect some similar posts but these antique cameras are pretty cool. My first camera, and piece from the Historical Significance collection, is an Eastman Kodak Target Six-16 Brownie. I unfortunately can't remember where I acquired this one, it is probably from my Uncle or Grandfather, they have graciously donated many cameras to the museum. This model was made circa 1948, as in they first started to introduce them back in 1946 and discontinued them in 1951.
UPDATE: So I was right in that it was from my Uncle, well first cousin once removed, and this was the camera I thought it was. This was purchased at an estate sale because it was the same camera that my great-uncle used to use back in the day. I have a picture back home that was taken with this type of camera (of my mom actually). I'm a big fan of genealogy so knowing the back history of this piece and it's ties with my family makes it that much more unique and interesting. And remember, if you have any suggestions or additions I should make about a certain piece just let me know.
Compared to today's cameras it is extremely bulky but Brownies were quite popular and the craze during the mid century. It did have the great feature of two image finders, one on top and another on the left side, for portrait and landscape photos respectively. It originally sold for $4.00. My camera still has some of its original film inside it, after I just learned how to open it after reading a scan of the original instruction manual (check out the More Information link below).
More Information
Posted by Unknown at 5:10 PM